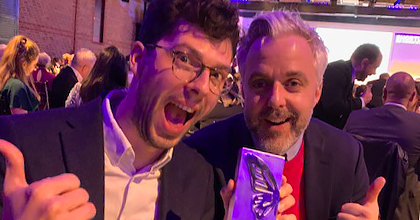 Triple success at the Transform Awards

The Mr B & Friends team had a successful evening at the Transform Awards this week, collecting three awards to add to the trophy cabinet.

Two of the team were finalists in the Young Contenders category, which celebrates outstanding achievements by those under 30. Middleweight Designer, Sara Foley, was awarded Distinction for the combination of her work on projects such as the Bristol Bears rebrand, and her role as a chapter leader for Ladies, Wine & Design, a creative movement focused on empowering female creatives. Strategic Planner, Tom Rickhuss received Merit for his excellent work over the last two years, which included the ‘Steps for refugees’ campaign at his previous agency.

The crowning achievement of the evening was a Silver award for the agency for the Bristol City Football Club rebrand in the category of ‘Best Brand Evolution’. The project involved creating an entirely new brand identity for the Championship club, which appears on the latest kit. The creation of the crest, featuring the return of the iconic robin, followed a consultation with 3,350 people from stakeholders to supporters and met with an overwhelmingly positive response.

The full list of winners can be found here.